The purpose of the webinar was to give SME’s & Universities an opportunity to discuss how their collaborations have come to fruition & what it means to have cross collaboration at the heart of their technologies.

Simon Brewster CEO Dolphin N2 set the scene for the webinar, by exploring the journey which Dolphin N2 & the University of Brighton have been on together.

Dolphin N2 are a new company, founded by Ricardo in 2017. Having incubated the recuperated split cycle engine technology alongside the University of Brighton since 2017, Dolphin N2 have grown from a team of 7 – 35 people, based in Shoreham & Millbrook, Bedfordshire.

Having successfully spun out from Ricardo in December 2019 & being purchased by FPT Industrial, a subsidiary of CNH Industrial; the Dolphin N2 split cycle CryoPower recuperated engine is now on track for a full production launch 2025-2026. 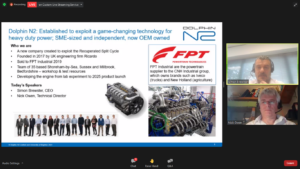 Nick Owen – Technical Director, Dolphin N2 gave a technical overview of the Dolphin N2 engine & how the University of Brighton collaboration has been key to moving the project forward.

With the world already embracing electrification for cars & short journey vehicles, the application cannot be sustainable for heavy duty & trucks. The fact that heavy duty haulage & trucks are mostly working 20 hours a day, often 365 days a year; the electrification route would leave little opportunities for charging opportunities to make the system effective. 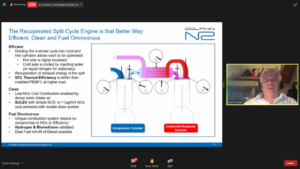 Nick Owen posed the question “What if there was a better & more painless way to a smooth transition to net zero for heavy duty & haulage?”  The answer is a clean, efficient, fuel omnivourous engine; the recuperated split cycle engine, a new engine for a new era.

The recuperated split cycle engine not only recuperates waste heat & in doing so reduces NOx to sub-ambient levels; it also is fuel omnivourous, having already been hydrogen & biomethane validated. 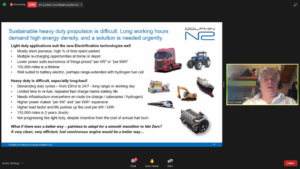 The Dolphin N2 recuperated split cycle engine is not an evolution engine, it is an entirely new product, set for roll out production in 2025.

Non of the development would have been possible without the collaborations Dolphin N2 have developed over the years. As Nick mentions, if you need a 800°C / 70 bar recuperator, these are not items which are off the shelf. These items have to be developed alongside other SME’s, specialists in their fields.

With supply chain SME support from companies such as Hiflux, Zircotec & Bennaman, academic support from The University of Brighton, The University of Sheffield & Politecnico (Milan) & Consortium grants & private funding; the Dolphin N2 technologies have been developed with collaboration with a varied collection of SME’s, academia & investment partners. 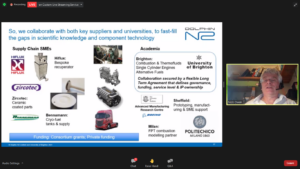 Professor Morgan began to explain that one of the ways in which him & his team were able to fathom the development needs of the Dolphin N2 engine technology, was through what is known as the Impact Factory.

When discussion about the banning of fossil fuel based engines began in earnest, the engineers at the University of Brighton began to consider their options & how to solve the problem.

The Impact Factory ethos uses the idea of problems being Tame, Messy or Wicked. “Messy or Wicked problems, are hard to explain or describe, until you know the question you should be asking”

Diesel engines problems are in their chemistry. Oxygen plus Fossil Fuel plus Nitrogen equals Power plus Heat plus GHG plus Oxides of Nitrogen. With the high compression ratio equalling hotter combustion & NOx; the Higher the efficiency of the diesel engine, the more NOx it will produce.

Having to un-learn 100 years of diesel technology & re-writing the rule book on diesel engines, the University of Brighton engineers were able to decouple the engine & with either water or liquid nitrogen; super cool the exhaust emissions, removing the NOx & in doing so eliminating tailpipe emissions.

When it comes to collaboration with the University of Brighton, their testing abilities have been vital for the development of the Dolphin N2 engine. 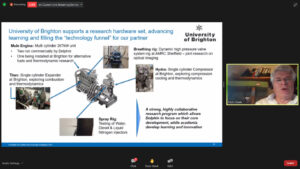 Attendees were attending the ‘Knowledge exchange and collaboration between SMEs and Universities’ webinar, hosted by Connected Places Catapult.