However, despite the climate scientist’s warnings & the accumulated research instilling a chilling fear in most of the human race; we still have a vast task ahead of us, to salvage & solve our climate crisis.

However, beyond the needs for our economies to decarbonize, we need to seek continual ways in which our biodiversity & our climate are creating more natural remedies to the Co2, GHG & emissions crisis we now face. Despite some Government representatives seeming to only see the possibilities of a ‘scientific’ resolution to the Co2 dilemma, European Parliamentary Committees lawmakers being divided into two camps on this issue & the use of technology like carbon capture and storage (CCS): some lawmakers favour its use and one which is adamant that planning for 2050 should not “overly rely” on it. (1)

However, one expert with the European Environmental Bureau agreed that “the path to net zero emissions by 2040 must not be dependent on unproven negative emissions technology”, citing forests and carbon sequestration as “natural and effective” options.’ (1)

Therefore, what research has been undertaken & what strategies are being put in place to find more natural ways to defend the human race from the advances of climate change & biodiversity collapse?

One field of study is the use of different plants & micro organisms to act as absorption & replenishment. Professor Joanne Chory, one of the world’s leading botanists, has been studying ways in which plants can & do process Co2 & in her words “they fix it, then it goes back up into the atmosphere.” (2) 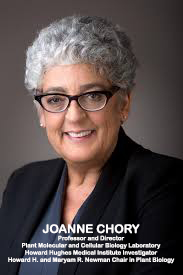 Professor Joanne Chory, one of the world’s leading botanists, has been studying ways in which plants can & do process Co2

Professor Chory is now working to create plants capable of storing even more carbon dioxide in their roots. Her ‘Ideal Plant project’ uses gene editing – via traditional horticulture and Crispr – to do so. On a large scale, this could suck enough carbon out of the atmosphere to slow down climate change.

This concept splices the genes of regular crops and everyday plants like beans, corn and cotton, with a new compound that makes them absorb more carbon. Their roots then transfer it to the soil to keep it there. (2)

In addition to the work Professor Chory is undertaking, there are companies who are patenting new & innovative ways of using plants to act as ‘air purifiers’ for inner cities.

The City of London, UK even with it’s 47% ‘green cover’ is struggling with advanced pollution & toxic air pollution, which, according to King’s College London, contributes to 9,000 premature deaths every year.

As part of its ‘greening’ mission, City Hall is promoting the planting of living walls & vertical vegetation near busy roads to reduce CO2 emissions and absorb other pollutants.

Green roofs are also part of the plan. Growing plants above our heads can reduce the urban heat island effect, keeping air temperatures down, and cutting energy use for cooling. Vegetated roofs also absorb rainwater, and attract birds and bees. (3)

With the prospect of London & City Hall promoting the use of vertical planting & citizens trying to plant as much ‘greenery’ as they can, one new start up Arborea in collaboration with Imperial College London, are spearheading their ‘BioSolar Leaf’ technology to improve air quality. 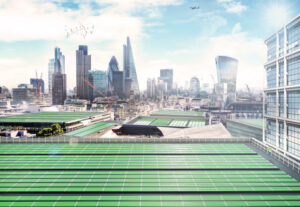 The technology, which is the first of its kind in the world, purifies the air through the photosynthesis of microscopic plants, removing greenhouse gases from the environment whilst generating breathable oxygen.

Arborea have developed an innovative cultivation system which facilitates the growth of tiny plant-life – such as microalgae, diatoms and phytoplankton – on large solar panel-like structures. These can then be installed on land, buildings and other developments to improve surrounding air quality.

The team say that Arborea’s cultivation system can remove carbon dioxide and produce breathable oxygen at a rate equivalent to a hundred trees from the surface area of just a single tree.(4) 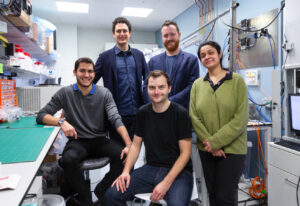 These are just a snapshot of ways in which science, botany & an understanding of the diverse nature of plants, can create a balance in our biodiversity. Humans are finally striving for ways in which we can successfully move away from a technological ‘carbon capture’ future & return to the very roots of planet Earth. With scientists & botanists seeking out ways in which the ‘nature’ of our planet, having evolved over billions of years, has the capacity, with human input; can hopefully go some way to reversing advancing man-made climate change.