Hydrogen continues to be recognised as another way in which our transport systems can develop zero emissions vehicles.

Hydrogen has become particularly favoured as a sustainable fuel well suited to the heavy-duty sector & companies across the globe are acknowledging this potential.

The need to develop greater green hydrogen networks to work towards a fully sustainable Hydrogen economy is being addressed globally, with Hydrogen agreements & growing networks developing all of the time. However, it is also known that to reach a fully Green Hydrogen economy is going to take some considerable global effort.

The International Renewable Energy Agency’s (IRENA) 2021 World Energy Transitions Outlook has estimated that hydrogen and its by-products could account for 12% of final energy consumption by 2050, with two-thirds coming from green hydrogen (made with clean electricity) and one-third from blue hydrogen (made from fossil fuels & using carbon capture). (1)

Despite the positives of Hydrogen use in the heavy-duty, off-highway, agriculture, marine & aviation sectors as a way of decarbonising tailpipe emissions and the shift to a green Hydrogen economy, supported by a blue Hydrogen economy with CCS; there are still some negative hurdles to overcome in the negative impact of Hydrogen production.

According to the World Economic Forum in 2020 the world produced around 90 million tonnes (Mt) of hydrogen, generating 900Mt of CO2, around twice the UK’s 2020 emissions, with the vast majority of this hydrogen being used by the refining & chemicals industries.

If we were to replace our existing consumption of grey hydrogen with green hydrogen, we would require a lot of extra clean electricity (double the amount of renewable electricity that had been installed by 2020 globally). (1)

However, as the Hydrogen economy takes shape, so too does the way in which Hydrogen is produced and with continued and greater effort being made to make Hydrogen production fully sustainable; its use as a fuel to decrease global emissions has got to be recognised.

The UK Government Hydrogen Strategy 2021 predicts that by 2030 Hydrogen will be in use across a range of transport modes, including HGVs, buses and rail, along with early stage uses in commercial shipping and aviation. (2)

Their analysis shows there could be up to 6TWh demand for low carbon Hydrogen from transport in 2030. Beyond this they expect to see an increased role for Hydrogen in aviation and shipping decarbonisation which could become a large component of the overall hydrogen demand in the long term. To meet CB6 in 2035 they estimate the demand from transport could be 20-45TWh. (2)

Therefore, it is little wonder that British companies are exploring new ways to incorporate Hydrogen into their zero emissions developments.

Rolls-Royce announced on Monday 16th January 2023 that it has conducted successful tests of a 12-cylinder gas variant of the mtu Series 4000 L64 engine running on 100% hydrogen fuel. (3)

The tests, carried out by the Power Systems business unit, showed very good characteristics in terms of efficiency, performance, emissions and combustion. These tests mark another important step towards the commercial introduction of Hydrogen solutions to meet the demand of customers for more sustainable energy. (3)

“This engine will serve the market demand for Hydrogen solutions in the energy transition and will be available to our customers as a reliable and clean power source for gensets and combined heat and power plants.” (3)

During the New Power Progress Summit in May 2021, Bamford illustrated the benefits of Hydrogen by acknowledging that a bus can travel 300 miles fuelled by diesel and take only minutes to fill up. A bus can travel 285 miles on hydrogen and take 7 minutes to fill up and 183 miles on a battery model and take 7 hours to charged (Bamford’s words correct at time of original publication). (4)

Since the summit in 2021, Wrightbus have now developed the world’s first Hydrogen FCEV powered double decker bus, the StreetDeck Hydroliner. The StreetDeck Hydroliner is powered by renewable Hydrogen, has an 8 minute refuelling time and a range of 280 miles. NB: The Hydrogen Fuel Cell power train and its battery pack can store up to 48KWh which allows the bus to travel up to 280 miles. (5)

Data collected from the trial also showed that the HGV used approximately 65% of its Hydrogen capacity per trip, giving it an approximate operational daily range of 320 miles on one fill of Hydrogen. Hydrogen for the trial was supplied by Element 2, the company building the UK’s national network of Hydrogen refuelling stations. (6)

These British companies are just some of the British based Hydrogen transport innovators who are not only recognising the potential for Hydrogen in the race to zero emissions; but are actively developing the technologies to expand the British Hydrogen economy. 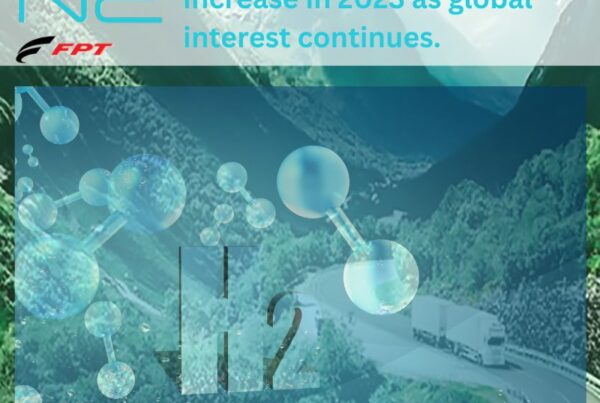 Hydrogen production to increase in 2023 as global interest continues.