With the endless outpouring of media coverage about the upsurge in climate action, activists making the masses more aware than ever of the climate crisis planet Earth is experiencing & with more protests from Climate Action group Extinction Rebellion keeping the momentum; is anyone actually doing anything to repair this little blue planet we humans inhabit?

With climate deniers sending mixed message amongst social media streams, Governments & Policy makers seeming to promise one thing with one hand & take it away with the other; who or what is actually acting on their promises & making a valued effort to reduce their carbon footprint on our damaged planet?

One of the biggest battles we have in the climate crisis, is that human beings have become blinded by consumerism & a throw away mentality.

The ‘make do & mend’ generation of post WW2 are well documented in history as making the very best of what they had, what was immediately available & having the where withal to repair, to mend or to rejuvenate; rather than throw away or dispose of something with plenty more life in it.

However, since the upsurge in technological advances made by human beings & vast corporate names being born out of a seeming need for humans to strive as individuals to always have the latest technologies at their finger tips or the most up to date product; companies have created an in built longevity into their technological items using a tactic known as ‘built in obsolescence’

Built in obsolescence enables a company to give electronic items a shelf life, or rather an expectation of a ‘shelf life’ With every upgrade, new product, new tech, the previous technology becomes obsolete. In some case’s items such as computer software are often outdated before they even hit production, as a new upgrade has already been written to supersede it.

Therefore, with this knowledge intact, why are humans still needy when it comes to technological upgrades? What in built programme in a human has allowed us to become so attached to the need for the latest, fastest phone, iPad, car, PC, data set…the list is endless? & out of all of the industry giants who feed the human need for the very latest technologies, are any of them actually making an impact on their carbon footprint?

Surprisingly there are plenty of big names & big corporations making massive changes to the way they manufacture & produce goods for an ever increasingly technologically driven human race & the corporate companies & start-ups in the mix have one thing on their agendas; to repair planet Earth, while helping the human race to advance & develop.

In the first of a two part exploration into the environmental activities of Earths electronic corporate giants, we are going to take a brief look at three key electronic technologies which affect human beings every day; mobile phones, computers & electronic component manufacturers. This weeks blog focuses on mobile phones.

In 2009 mobile phone & tech giant Apple Inc, publicly left the U.S. Chamber of Commerce over its stance on climate change. In 2015 their environmental policy opened with the statement “We don’t want to debate climate change. We want to stop it.” (1) & since then they have become a climate sensitive force to be reckoned with.

Their website extols the virtues of their extensive recycling programme with their MacBook Air & Mac mini enclosures all being made from 100% recycled aluminium & the solder in the main logic board of the iPhone being made with 100% recycled tin . More than 40 components in the iPhone XS, iPhone XS Max & iPhone XR contain recycled plastic & 100% of the wood fibre in Apple’s packaging comes from recycled sources or responsibly managed forests. (2)

However, Apple are not just making changes in their manufacturing processes, their environmental actions are far reaching & impact their entire supply chain. The Apple press release in April 2019 announced the companies environmental achievements to date & focused on their realistic & long term goals for the company.

With Apple spending $2.5 Billion in Environmental Initiatives, they have as of 2018 now been running their entire operations on renewable energies & this is in part due to the success of their Supplier Clean Energy Programme. ‘Manufacturing makes up 74 percent of Apple’s carbon footprint, so the program helps its suppliers increase energy efficiency and transition to renewable energy sources. Just last year, Apple and its suppliers participated in clean energy generation that roughly equaled the electricity needed to power over 600,000 homes in the US.’ (2)

Although corporate giant Apple are making considerable waves with their environmental policies & practises & taking responsibility for their climate impact; there are start-up’s who have considered their climate impact before manufacture & design & base their entire company ethos around it.

New company Fairphone are an ecologically mindful company, whose entire ethos focuses on the ideal of a ‘fairer electronics industry’ with every ethical facet of the manufacture of their Fairphone mobile phone being accountable.

Fairphone believe in the notion that sustainability, ethical sourcing & longevity are at the core of the future of electronics & cite the following as their mandate for creating a truly ecologically sound product:

A fairer phone: Fairphone believe that responsible materials sourcing, sustainability & workers welfare are imperative for the future of the electronics industry.

A fairer future:  Fairphone are succinct & to the point when it comes to their company ethos “Fairphone puts people and the planet first.” (3) By being aware of human rights for their workers & suppliers, caring about the climate & the planets ecosystem, about designing longer-lasting products which are easier to repair & reducing waste; Fairphone take a fully holistic approach to the entire process of manufacturing.

Creating products that last: Fairphone design for longevity, easy repair, & modular upgrades. Their goal is to make a mobile phone’s hardware last as long as possible, & to provide the support to keep its software up to date. The longer an end user can keep their phone, the smaller its environmental footprint. (3)

A recent Which? Report has identified which Mobile Phone companies have more ethical & environmental policies & practises in place.

With part of the Which? focus being on the acquisition of ‘conflict metals’ used in the manufacture of mobile phones, namely tungsten, tantalum, tin & gold; their findings reflect the information above & support the way in which some manufacturers are clearly more environmentally & ethically focused than others: 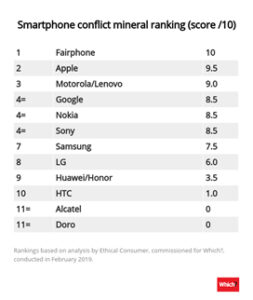 Although we have a very long way to go to redress the balance of the throw away culture humans have fallen foul of; it is reassuring to know that amongst all of the climate crisis & climate change media, there are glimmers of hope & they are coming from some of the biggest manufacturing & product names in our lives.