Diesel engines still, to a certain extent, power the world. Haulage & off-highway trucks are still the way in which our economies are supported by the movement of our consumer needs including foods, clothing, electrical, automotive & lifestyle essentials.

“These are the engines that power the world and our economies – agriculture, construction, transporting raw materials and goods, and delivering energy to our homes, schools and hospitals. However, with continued growth and increasing focus on both air quality and climate change, the industry is acting to deliver improved efficiency and much lower emissions.” Simon Brewster CEO Dolphin N2 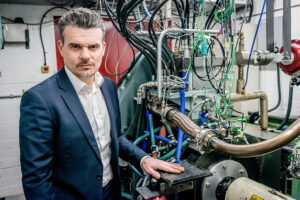 “These are the engines that power the world and our economies – agriculture, construction, transporting raw materials and goods, and delivering energy to our homes, schools and hospitals. However, with continued growth and increasing focus on both air quality and climate change, the industry is acting to deliver improved efficiency and much lower emissions.”

The requirement to reduce global Co2 emissions is a necessity, as we are all too aware of the need to reduce & stabilise the global temperature to at or below 1.5 degree C. The IPCC report 2018 showed the world the glaring evidence of the impact of man-made climate change & what the world must do to ensure that we all act on reducing the Co2 in our atmosphere & improve air quality globally. The future has been deemed to be very bleak, with Cyclone Idai having made landfall over Mozambique recently & destroying vast swathes of land & killing hundreds; it has been believed to show the secondary impact of climate change.

With this very stark incident still prevalent in our news, the British news reporting on the need to reduce pollution & improve air quality, in particular around our schools & young people; we are seeing the media coverage about the impact of man-made climate change growing. Recent reports have proven that the number of premature deaths due to air pollution are double previous estimates.

“Scientists have used new data to estimate that nearly 800,000 people die prematurely each year in Europe because of dirty air, and that each life is cut short by an average of more than two years. The health damage caused by air pollution in Europe is higher than the global average.“(2)

With these examples of the impact global man-made climate change is having on our weather systems, our earth & our air, who is doing what to try & reverse & or alter the global path which the IPCC & global scientists have laid out before us?

Dolphin N2 have been spearheading their CryoPower spilt cycle diesel engine, which has the ability to recover the exhaust gas heat as part of the compression process. As the compression process is carried out isothermally, this significantly reduces the temperature rise during compression through the use of a small jet of liquid nitrogen being added at the crucial moment. The cooled, highly compressed charge, then passes through a heat exchanger & subsequently recovers the heat within the engine, recouping energy which would otherwise be lost to the atmosphere. The Dolphin N2 CryoPower split cycle diesel engine also offers up to 90% less out emissions.

Simon Brewster CEO Dolphin N2 recently Chaired the 2nd day of the Future Diesel Engine Summit, Shanghai on March 28 2019. This is what he had to say about the conference & the messages taken from this prestigious event:

“Of the 10 million heavy duty engines made worldwide each year around half are manufactured in China, and so this forum was essential to learn more of the market specific challenges and to discuss our path to near zero heavy duty emissions and beyond.”

“The delegates were given insight into Chinese and global emission standards, global market trends, and the development of diesel engines and technologies to meet and exceed future standards. Clearly China is determined to meet the challenge with standards matching and exceeding those in other markets.”

“Many cutting-edge questions were addressed including remote monitoring of emissions performance, the need to consider full lifecycle emissions including manufacture and disposal, and technology adoption into commercial market sectors which will be determined by equipment operational and commercial factors.” Simon Brewster CEO Dolphin N2. 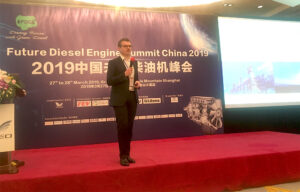 As China produces over half of the heavy duty engines for the global markets, what are Chinese manufacturers doing to combat Co2 emissions & improve air quality?

The Chinese media have reported in recent months that the Ministry of Ecology & Environment will be penalising the most highly polluting diesel trucks with more stringent fuel & engine standards. The purpose of these actions will be to make an increased impact on the Co2 emission crisis & dramatically improve air quality, which is much needed in many of the Chinese provinces. ‘The Ministry of Ecology and Environment said in a policy document it would aim to “significantly increase” the number of diesel trucks capable of meeting emission standards by 2020, targeting a compliance rate of at least 90 per cent by next year (2020) & and reduce overall nitrogen oxide and particulate matter emissions from fuel combustion. (3)

According to the data released by China’s Ministry of Ecology and Environment, vehicles affected by the China VI standard account for over 90% of particulate matter emissions and nearly 70% of NOX emissions from China’s on-road transportation fleet. These pollutants contribute to ambient PM2.5 and ozone concentrations and lead to heavy haze days. Diesel engine exhaust has been recognized as a human carcinogen by the International Agency for Research on Cancer (IARC) of the World Health Organization (WHO).’ (4)

Leading Chinese manufacturers are heeding the call to ensure their haulage & heavy-truck vehicles are China standard 6 compliant.  The five industry leaders in diesel engine building in China are Weichai, Yuchai, Yunnei, Foton, and Quanchai , which are prominent companies in China, but relatively unknown outside the country. In 2018 ‘China Yuchai International Limited, a leading manufacturer and distributor of engines for on- and off-road applications in China through its main operating subsidiary, Guangxi Yuchai Machinery Company Limited (GYMCL), launched 14 new engines compliant with China’s more stringent National VI emission standards.’ (5)