Where does decarbonization of UK shipping fit with Government policy?

By Katy JaneDecember 3, 2018 No Comments

Where does the decarbonization of UK shipping fit in with the Government policy on decarbonizing the transport sector?

Decarbonization is a verb we are all very familiar with & the strategies to ensure we continue to decarbonize our transport systems is a global one. Following the Paris agreement, global governments have been set targets to meet a net zero emission environment by 2050. The fossil fuel industries having been blamed for the vast Co2 levels & the corroborating facts from the IPCC 2018 report; have ensured that actions must speak louder than words, if we are to keep global temperature increases under 2.0oC.

The UK Government has over this year introduced new strategies to reduce the carbon emissions in the UK. The City of London now sports Borough’s whereby diesel vehicles, in particular haulage & LGV’s, are not permitted or have hefty fines imposed if they break these protocols. The UK Government has also announced that the original date of 2040 for a country wide ban on new petrol & diesel vehicle sales, be now brought forward to 2032. Furthermore, the Government initiatives identified at the Zero Emissions Summit in September 2018, were headed up by a pledge of ‘£106 million for research and development in zero emission vehicles, new batteries and low carbon technology.’ (1)

However, the Zero Emissions summit seemed to be mostly focused on the need for the technologies & infrastructure to reduce emissions on the British roads, it did not seem to extend this umbrella of investment & focus on the shipping & maritime transport sector, an area which is responsible for 2% of the global Co2 emissions.

With this in mind, we have to consider how the UK Government plans to invest in the reduction of the Co2 produced from our shipping, alongside the emissions from our roads. When the Department for Business, Energy & Industrial Strategy rolled out it’s Clean Growth strategy in April 2018, the focus was on reducing the 24% emissions produced from our ‘transport’ system. This did not however effectively or wholly address the shipping sector, of which we know is responsible for 2% of global Co2 emissions.

The IMO (International Maritime Organisation) specialising in the safety, security & efficiency of shipping & the prevention of pollution from ships, have collaborated with the GIA (Global Industry Alliance) to create GloMEEP (Global Maritime Energy Efficiency Partnerships).

The GloMEEP project has been implemented to ‘support the uptake & implementation of energy efficiency measures for shipping, thereby reducing greenhouse gas emissions’ (2)

The initiatives being implemented by GloMEEP, have not been as well received by some international countries. Earlier this year during the IMO meeting in London, Brazil shared their concerns about their economy in light of the expectations put upon their country.

‘Brazil argues against fixing a goal right now because 90% of its international trade is carried by shipping and because its geographic position means it is very distant from major markets so a limit on emissions would be unfair.’ (4)

The IMO agreed to an ‘initial strategy’ in April 2018, to reduce the global shipping emissions by 50% by 2050. The GIA Task Force meetings having already tackled these issues in the past, came together for the 4th Task Force meeting on Tuesday 27th November.

The 3rd GIA Task Force meeting which was held at Ricardo UK’s headquarters in Shoreham explored the ‘validation of performance of Energy Efficiency Technologies, barriers to the uptake of Just-In-Time Operation of ships & resulting emission & fuel saving opportunities.’(5)

Simon Brewster – CEO Dolphin N2, attended the GIA 4th Task Force on Tuesday 27th November at the IMO Headquarters in London. The purpose of the 4th Task Force meeting was to ‘discuss how the GIA can support IMO in the development of measures that can increase the uptake of low carbon fuels (with a view to feeding this into IMO’s work on the Initial GHG Strategy). ‘(6) 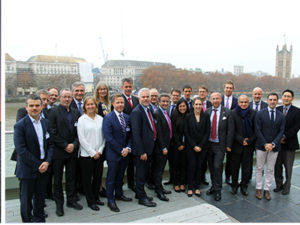 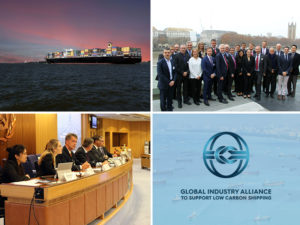 The 4th Task force meeting focused on the adoption of low carbon fuels in the shipping sectors, yet we are still seeing a one-sided negative view of the use of liquid fuels generally in the media, which gives a jaded vision of the outcomes of still using fossil-based fuels for transport, whether that be cars, trucks or ships.  ‘The meeting agreed, as a next step, to hold a GIA roundtable early 2019 to discuss how early movers could be incentivised to invest in alternative fuels. ‘(8)

As we begin this week with COP24 taking place in Poland, the discussions about Climate Change & the global need to reduce Co2 emissions, will become a very prevalent topic once again. The decarbonization of Earth’s transport system will be discussed, as COP24 seeks ways to enable governments of the world to make practical & far reaching changes. COP24 is designed to corroborate the expectations of the Paris Agreement, with education & understanding being paramount. Yet we must not lose sight of the ways in which low carbon liquid fuels can still support the global transport systems & how through effective implementation & understanding, we can decarbonize transport, with adequate investment in the research & development of alternative fuel strategies.