Necessary carbon neutral advances in the automotive sectors are now an acceptable part of the manufacturers & consumers language.

Recent national advertising of the electric car being ‘The Car’ for example, is a way for consumers to be targeted & subliminally plant the seeds of a change in attitudes towards automation & the automotive industry at large.

However, there are still many who sit on the fence when it comes to the longevity of the electrification movement. One example of the ways in which some leading manufacturers view the future, can be seen in the Toyota Corolla Hybrid advertising campaigns.

One 2019 campaign focuses on horse drawn carriages (clear metaphor for horse power) & on a series of automotive vehicles harping back to the innovations of the 1800’s, examples of the racing scene & diesel; all seen racing through a desert, with a red Toyota Corolla weaving in & among them, over taking as it goes.

What is interesting here is the fact that the ‘hybrid’ also drives past a montage of a man charging his electric car, whilst he looks impatiently at his watch. The natural outcome of this advertising campaign, is that the clear ‘winner’ in the desert race is the Corolla Hybrid & with the voice over slogan at the end of the advert asking us “As the world moves forward, what will your choice be? The new Corolla. Move ahead. Choose Hybrid” there is a clear message here about the way in which this particular manufacturer feels the future of the industry lies.

This is only one example of the many changes being made by the automotive industry. With Tesla preparing to build Gigafactory 4 in Europe, the first electric Mini now in production & even Volkswagon now releasing it’s series of zero emissions vehicles; the changes are coming thick & fast.

However, one area of the automotive industry which is still struggling to strike a chord & find a keen following is in the motorcycle industry.

Dolphin N2 have written before about the innovations in the motorcycling world when it comes to carbon neutral & zero emissions machines; however, the motorcycling community are not yet convinced by many of the aspects the current market machines have to offer.

With a lack of engine sound (synonymous with the experience of motorcycling) distance anxiety & purchase costs being a considerable contributory factor to the resistance for many motorcyclists to change from the internal combustion engine to, what is the only offering currently, electrification; the motorcycle industry still has some considerable way to go to convince motorcyclists that ‘electrification’ is the only way forward.

Many years ago, February 2009 in fact, Top Gear’s James May was featured riding a hydrogen cell motorcycle concept by Intelligent Energy known as the ENV (en vee)

May explained that the hydrogen cell in the motorcycle, draws on oxygen in the atmosphere to charge the fuel cell, producing electricity on demand to power the electric motor. With a microscopic 8bhp, May described the experience of riding the ENV as “Serene” but he was also disconcerted by the lack of noise & not knowing if the motorcycle was actually running. However, despite this innovative stance, the ENV prototype has remained just that, a prototype.

Despite the resistance from the motorcycling world to embrace electrification to replace the reliability of the internal combustion engine, the need for change by the manufacturers cannot be ignored & one of the best places to see this ‘quiet’ revolution, is at the leading motorcycle shows. The Milan Motorcycle Show (EICMA) is the largest motorcycle trade show in the world & is where all of the leading manufacturers & innovators release their latest projects.

Because of the shear size of the EICMA Show, it has a much greater capacity to explore the world wide innovations of the motorcycling world & with an ever increasing emphasis being on electrification & zero emissions; it was no surprise that the electric motorcycle companies chose this platform to let their machines be seen.

A few of the innovations seen at the EICMA show, were from lesser known companies, making their name in the electrification world:

Horwin’s EV Motorcycles CR6 & CR6 Pro are only part of a portfolio of EV motorcycles Horwin are producing. The Motocross ‘Ranger’ is also in pre-production. With a peak power of 6kw & a top speed of 45km/h, the Ranger sports an acceleration power comparable to a 125cc (2)

The bike’s powerful motor is hidden in the rear wheel, yet you’ll note the wheel is also hubless. The 80 kW motor is actually housed in the rim of the wheel and produces a powerful 1,000 Nm of torque measured at the rear wheel. (1)

Despite the innovative & careful styling of the Verge TS, the current distance for the TS is 200km highway & 300km city range (3)

For many, getting out to EICMA is not a possibility, so many UK motorcyclists head to the largest motorcycle show in the UK, Motorcycle Live at the NEC.

Dolphin N2 have explored the zero emissions motorcycle market previously, but without having seen the machines being interacted with by the interested public. ‘Zero’ are one of the front runners in the electric motorcycle race, having worked hard to ensure that the aesthetic in some way can match the performance.

Zero’s representation at Motorcycle Live has grown from a small enclosed stand in a corner, to a vast open space, jostling alongside big names like Can Am.

New for this year, Zero have launched their Touring electric motorcycle. With distance anxiety still rife amongst those in the motorcycling community, there is still some eyebrow raising to this latest innovation. However, in true Zero style they have managed to pull this off with the Zero DSR Black Forest. With a city range of 204 miles, highway range 121miles & a combined range of 153miles, the DSR Black Forest also sports a net power of 69hp, with continuous power of 30hp. With a top speed of 98mph, weighing in at 210kg, a carrying capacity of 142kg & a cost to recharge at £3.20; this is an attractive alternative for the eco conscious tourer.

With different options for charging, the Charge Tank option is compatible with Level 2 charge stations and delivers roughly 6x faster charging than when compared to a standard wall outlet. Depending on the battery, a typical recharge can now take as little as an hour.  (4) 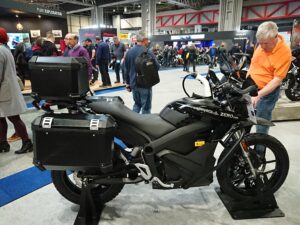 BMW, not to be out done, brought their Motorrad Vision DC Roadtser to Motorcycle Live 2019. 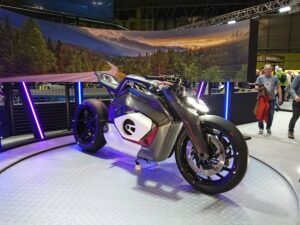 BMW, not to be out done, brought their Motorrad Vision DC Roadtser to Motorcycle Live 2019.

Despite the fact that their website extols to virtues of it’s aesthetic & even goes as far to explore the need for the specifically designed matching ‘rider equipment’ to be a key feature; there is limited technical data thus far, which includes any information on distance capabilities, charging times & costs.

The one thing they do say in their promotional materials is:
“The large battery with its laterally protruding cooling systems is positioned at the centre of a frame milled from aluminium. The three-dimensional surface finish on the battery trim conveys a contemporary aesthetic appeal with its precise contours. The cooling elements echo the slight forward tilt of the battery silhouette, giving the side a dynamic momentum. When starting the electric motor, these cooling elements move out slightly, indicating that the bike is ready to go”(5)

Despite the technology, the necessary options for the environmentally conscious consumer & the often times quirky ‘Tron’ styling; there are still inherent aspects of these innovative machines which are not enticing millions of motorcyclists out to purchase them.

Costs are a huge contributory factor, with prices ranging from £16,590 for the Zero DSR Black Forest base model up to £28,995 (plus on the road costs) for one of the new Harley Davidson Livewire base models; this is a vast investment in such a new technology. Furthermore, with such a hefty price tag, there is still some disbelief amongst the motorcycling community that the distance ranges, charging times & the weight of these machines, justifies such a vast investment, especially as the technology in the motorcycling industry is still relatively in it’s infancy.