Hit enter to search or ESC to close
Energy storage

How 2050 energy supply & demand deadlines are changing our energy networks.

The Westminster Energy, Environment & Transport Forum presents it’s ‘The UK gas network: infrastructure, decarbonisation & energy security’ conference today (16.07.19) at the Hallam Conference Centre in London. This conference looks at the future of the UK gas network – including the regulatory challenges that the industry faces and the next steps for decarbonising gas in the energy, heat and transport sectors. (1) The challenges we face in decarbonising our energy supply networks are vast, with an ever increasing need to increase renewable energy sources for our growing energy needs.

We are constantly seeking cleaner & more sustainable ways of generating energy beyond the traditional methods used in coal production. Solar & wind energy accounts for approximately half of the UK’s energy supplies. However, with ‘Zero emissions’ being at the forefront of the Government policies & the drive to achieve zero emissions by 2040; the race is on to ensure constant energy supply, while adhering to the global emissions standards.

Technological improvements in recent years have led to a dramatic fall in the cost of renewable energy. Previous analysis by the International Renewable Energy Agency has demonstrated that onshore wind farms in particular already have the capacity to out compete fossil fuels. (2)

Critics of solar & wind farms have a very valid point when they query the stability & sustainability of this energy source; namely, what happens when the wind stops blowing & the sun goes in? In addition, the ability to store this energy poses its own dilemmas, as by its very nature, it can only be produced sporadically.

There have also recently been renewed calls to re-evaluate nuclear energy as a safe & sustainable renewable energy generator. However, incidents such as the Chernobyl disaster of 1986 and more recently Fukushima in 2015 reduce the public appetite for this technology.

‘The contribution of renewable energy sources to the grid plays a significant part to reduce the use of fossil fuels but it introduces further instability in the supply side of a system that already has a volatile demand profile (which is further exacerbated by domestic plug in EV). In Europe the 450GW of installed wind power only 22.5 GW (5%) is available as a pool resource that can be relied on. This problem is described as “wrong time” energy; the morning peak in demand is not necessarily met with sufficient wind or tidal power and conversely the energy potential of a late evening or night time breeze is of little use unless it can be stored.

Globally, electricity production is approximately 5000GW but the storage capacity accounts for only 2.2%. Pumped Hydro Storage is the most mature and accounts for 99% of the global energy storage.  This involves pumping water to an elevated reservoir to increase its potential energy during “wrong time” energy periods and releasing the energy as electrical power with a hydro electric turbine during high demand periods.

Good examples of this in the UK are the pumped storage plants at Dinorwig and Ffestiniog in the Snowdonia region of Wales. The attractiveness of this technology is clear in environmental terms but also as a storage device as it has a huge storage capacity, Storage stability and long discharge time.

However, despite these extensive changes made to the renewable energy supply, electricity, solar & wind productivity; the need to decarbonise the gas networks is now an essential priority & necessary for the ever growing needs of communities both here & abroad.

With natural gas having being delivered by the network for more than 50 years, the continued use of unabated gas no longer meets the UK’s legally binding greenhouse gas emissions targets.

In addition to the natural gas network supplies, the disputes over ‘fracking’ by Cuadrilla have come under extensive scrutiny over the past year, as they were given permission to extract shale gas. The BBC reported on Thursday 11th July 2019:

‘Energy firm Cuadrilla has announced fracking is due to resume at its site in Lancashire. Fracking began at the Preston New Road site in October but operations were halted on six occasions due to underground tremors.

No fracking has taken place on site since December but Cuadrilla said the process would get under way again by the end of August.

The Little Plumpton site has been the subject of repeated protests. Anti-fracking protesters previously told the BBC that “fossil fuels had no place in a modern-day energy strategy” (4)

Dolphin N2 wrote an article last year about the dangers of fugitive methane.

‘As well as being a potentially significant pollutant in its own right, methane may be an indicator for the presence of other chemicals, and may also indicate problems with the process that need to be addressed.

The presence of methane in the air also indicates a loss of potentially valuable product for the operator. As unconventional gas operations are an emerging industry in the UK, there is a strategic need to develop a database of measurements that can be used to develop routine emissions estimates appropriate for UK conditions.

This would bring the unconventional gas industry into line with other comparable sectors (e.g. conventional gas production and processing, the landfill sector), where investment in monitoring has been used to develop routine methods of estimating emissions, based on generic factors derived from emission measurements.’(6)

However, there is plenty happening within the energy & gas networks to create an effective & realistic pathway to a zero carbon gas network by 2050.

‘ENA’s Gas Decarbonisation Pathways Project is a major industry initiative to build on the work that the networks have been undertaking to build a low cost, low carbon network and develop new technologies that make the most of biogas, bioSNG, hydrogen and smart hybrid heating systems. It will help coordinate network activity and support policy making for decarbonised gas.’ (5) 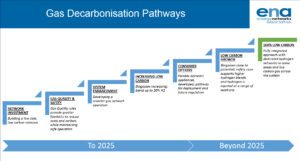 UK National Grid records ‘greenest’ ever energy usage. How are renewables supporting the decarbonisation of the grid?